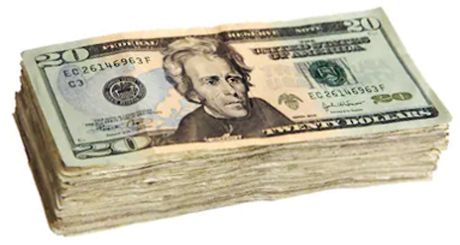 Unfortunately, today’s world is full of scammers, hackers and thieves who are always on the lookout for an easy buck.

To protect themselves lots of folks try to use cash as much as possible when traveling.

Yes, it’s true that carrying large amounts of cash can be dangerous.

But so can repeatedly inserting your debit card into unfamiliar gas pumps and ATMs or paying with a card at restaurants in strange towns and cities all along your route!

If you’re one of the millions of Americans who carry a considerable amount of cash along with you when you’re traveling, here’s a quick tip for doing it as safely as possible…

Take that thick stack of twenty dollar bills you just withdrew from the ATM into the bank and exchange most of them for 50’s and 100’s.

Why is this helpful? Well, let’s say you just finished withdrawing $600 in cash from an ATM.

Since most ATMs dispense $20 bills, that means you’re probably now holding 30 of them. That’s quite a stack!

Have you ever tried to put 30 bank notes into a wallet or small purse? It isn’t easy!

Some folks will take a good chunk of their cash and hide it in their car’s glove compartment or place it inside a suitcase and leave it in the trunk.

Truth be told, those are probably two of the least-safe places you could store it!

Smash-and-grab thefts and auto thefts are two of the most common ways people are victimized while traveling.

The only thing worse than waking up to discover that your car has been stolen is suddenly realizing that most of your cash is gone as well!

Exchanging smaller bills for larger bills is easy. I’ve done it myself at dozens of different banks over the years, and I’ve rarely had a problem.

In fact, there was just one bank (in Louisville, Kentucky) that was hesitant to accept my $20s and exchange them, but they gladly complied after I showed them the receipt proving that I had just withdrawn the cash from their own ATM.

Bottom line: The safest place to carry a large sum of cash is on your person, not in your car’s glove compartment or trunk.

And it’s a lot easier to carry a few $50s and $100s than a massive stack of $20s. Make your life easier by exchanging most of them for larger bills.

Just be sure to keep a few $20s on hand to spend in places that won’t accept larger bills.

If you ever need to exchange a $50 or a $100 for smaller bills, just head to the nearest bank because the exchange of cash works both ways.

If there’s no bank in the area or it happens to be after hours, head to the nearest Walmart and buy a candy bar. They’ll give you your change in smaller bills!

Now that that’s out of the way, here’s a fantastic short video discussing 10 of the biggest mistakes you can make while traveling. Check it out!