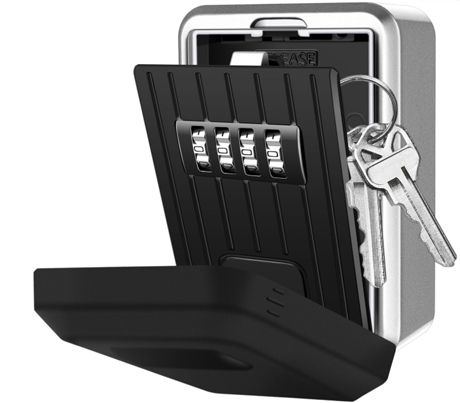 Do you keep a spare house key hidden under a rock, a rug or in some other place where the key could become lost or discovered by a burglar?

I’ll admit that I used to do that, but a recent spate of burglaries in which the thief searched for and found hidden keys prompted me to come up with a more secure plan.

I did some research online and ultimately decided to get myself a locking key storage box.

After checking out several models on Amazon I selected the Mofut Key Lock Box with 4-Digit Combination Lock based upon it’s almost perfect 4.8 star user rating.

This key lock box from Mofut is made of high strength zinc alloy to resist rust and the door is covered with protective rubber to keep out moisture and dust.

And even more important, it also resists crushing, sawing and prying to protect the stored key(s) from thieves and vandals.

That’s basically the same level of security that protects most common ATM cards!

As you can see in the photo below, this key box can be mounted to any outside wall using the included four anchors and screws. 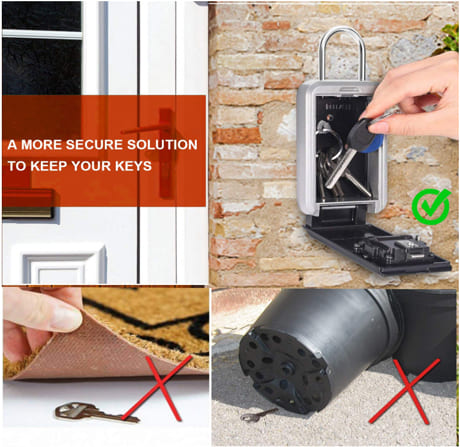 I mounted mine by drilling holes in the brick wall on my back porch, and I can tell you that it’s incredibly sturdy.

A determined thief could probably use a crowbar to pry the box from the wall, but he would still need to figure out a way to break into the box and retrieve the key.

Although there are no guarantees, I seriously doubt they’d take the time to pry the box from the wall and then try to figure out some way to force it open.

After all, time is of the essence when someone is trying to burglarize a home.

Bottom line: I found this attractive, but functional key lock box to be quite rugged and durable.

In short, I believe it to be much more secure than hiding a key under a rock or in some similar hiding place.

To finish up, here’s a fantastic video that’s packed with tips from real burglars that can help keep your house from being robbed. Check it out!