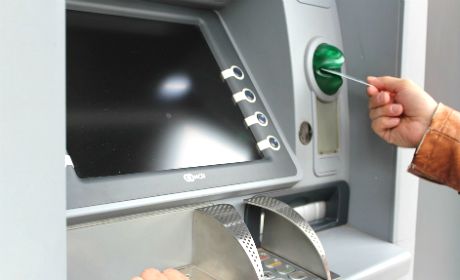 Do you love the convenience of using an ATM to withdraw cash from your bank account, but hate paying hefty ATM fees for the privilege?

It just doesn’t seem right that we should have to pay for the privilege of withdrawing our own money from our own bank accounts!

Well, I have some good news for you…

There’s a simple way to avoid having to pay ATM fees regardless of which bank’s ATM you happen to use!

But before we get to that let me explain how you can avoid ATM fees when using the ATM/Debit card you have right now:

All you have to do is limit your withdrawals to ATMs that are owned by your own bank!

The vast majority of banks don’t charge any ATM fees whatsoever for withdrawals made from their own ATMs.

That means simply driving an extra mile or two to one of your bank’s local branches could save you as much as 5 bucks!

Now the above being said, I realize that not all banks have ATMs in all areas. And of course Internet banks don’t have ATMs at all.

If either of these cases apply to you you’ll have no other option but to use ATMs owned by other banks.

But that doesn’t mean you have to pay their ATM fees!

If you simply must use a bank that doesn’t have any ATMs of their own or any branches in your area you can still avoid paying fees when you use an ATM.

Simply open an account with an institution that doesn’t charge ATM fees of their own and reimburses you for the fees charged by other banks.

If you live in a large metropolitan area you’ll probably be able to find a local bank that offers totally free ATM access as described above.

But even if there isn’t one available you’ll find plenty of online financial institutions that allow you to use any ATM from any bank for free.

Here are just a couple of the most popular options:

Aspiration’s checking account is totally free, and you can use your debit card at any ATM in the entire world at no charge.

There are also no minimum balance requirements and you’ll earn 1% interest on every dollar you have in your account.

What’s more, Aspiration donates 10% of their earnings to charity!

Fidelity has long been recognized as one of the world’s premier investment companies, but they also happen to offer one of the best checking accounts available anywhere.

You’ll get free checks, there are no monthly fees and there’s no minimum balance requirement.

But just as important, Fidelity doesn’t charge any ATM fees of their own and they reimburse you for any fees charged by the banks that own the ATMs you use.

Bottom line: If you only use an ATM on rare occasions having to pay an ATM fee isn’t really that big a deal. But if you’re like me and you use one several times a month those fees can really add up!

You can easily avoid paying any ATM fees at all by either limiting your ATM usage only to machines that are owned by your own bank or by switching to a checking account that doesn’t charge ATM fees itself and reimburses you for the ATM fees charged by other banks.

Bonus tip: ATMs are certainly handy, but using them can be dangerous at times.

The short video below offers several tips for staying safe while using an ATM.