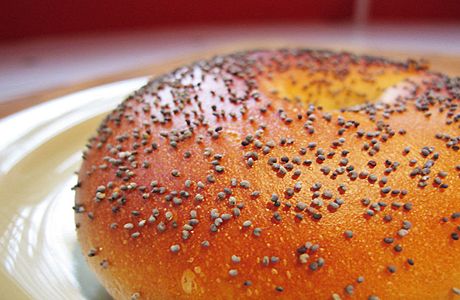 If you’ve ever applied for a job you were probably required to take a drug test as a condition of employment.

And like most people, you probably knew you had nothing to worry about because you don’t use illegal drugs.

But guess what? If you had eaten a Poppy Seed Bagel before going for your drug test there’s a good chance you might have failed it.

Excuses abound for why people fail a drug test, but as it turns out eating poppy seeds is one that’s actually legit.

While poppy seeds themselves don’t contain opium, the seed pods they’re extracted from do.

If the seeds aren’t thoroughly cleaned during processing the outside surfaces of the seeds could contain enough opium residue to trigger a false positive result for opioid use.

Luckily, poppy-induced false positives on drug tests are rare, but as this Washington Post story explains, they do occur.

As it turns out, it all depends on the sensitivity threshold of the test you’re taking.

If the sensitivity threshold for opium is set to a normal level, just eating a Poppy Seed Bagel or other food item containing poppy seeds won’t trigger a false positive.

It will if the threshold is set too low, however.

Bottom line: If you know you’ll be taking a drug test in the near future and you enjoy eating Poppy Seed Bagels (or any other food that contains poppy seeds), you might want to refrain from eating them for a few days before the date of your drug test.

Unfortunately, if your employer subjects their employees to random drug tests and you regularly eat foods containing poppy seeds, you will always be at risk of failing one.

To finish up, the Discovery Channel’s Mythbusters put the “Poppy seeds caused me to fail my drug test!” excuse to the test.

Watch the short video below to see how it turned out.