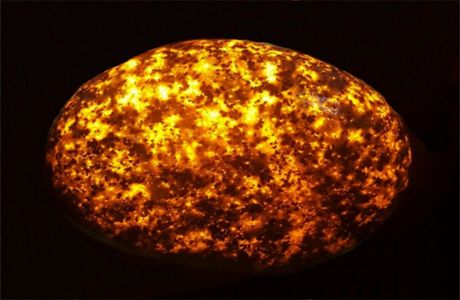 Have you ever heard of Yooperlite rocks?

Well, no one else had either prior to one dark night in May 2017.

That’s the night a local rock collector named Erik Rintamaki saw the very first (to be discovered) Yooperlite lying among all the other rocks on a rocky Lake Superior beach in upper Michigan.

This particular rock stood out from all the rest because it was literally glowing in the dark under the glare of his ultraviolet flashlight.

Not knowing what to expect, Rintamaki carefully picked up the glowing rock in order to get a closer view.

Now that he knew these glowing rocks existed, he started looking for more of them. And with the aid of a black light he found plenty!

Since he discovered the glowing rocks he got to name them.

After much deliberation he finally settled on the name Yooperlite in honor of the locals in the upper part of Michigan who are affectionately known as Yoopers.

Michigan State University acquired some of the rocks from Rintamaki in order to study them.

They ultimately discovered that the source of the glowing light is sodalite, a fluorescent mineral that’s infused within these special rocks.

Bottom line: If you ever decide to go looking for some Yooperlites of your own you’ll find them on the rocky beaches of Lake Superior in upper Michigan.

And for a fee, Mr. Rintamaki will even take you on a nighttime tour of the beaches and show you where to look!

Now, to finish up, here’s a short, but very interesting video about Mr. Rintamaki and his newly-discovered Yooperlite rocks. Check it out!