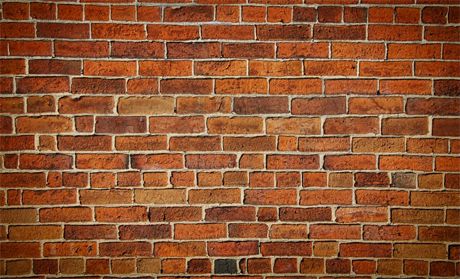 Question from Glenn:  I was walking through my local home improvement store and passed several pallets of bricks.

I noticed that most of the bricks had holes in them but the bricks on one pallet didn’t.

I’m just curious as to why some bricks have holes in them but others don’t?

Rick’s answer:  Glenn, the short answer to your question is solid bricks and “holey” bricks are used for two different purposes.

The holey variety are used primarily for building walls and other types of vertical structures.

When a mason is laying a brick wall each layer of bricks is securely placed onto a bed of wet mortar. Some of that mortar gets forced up into the holes in the bricks.

Once the mortar has dried the mortar inside the holes secures the layers of bricks together much the same way that nails would secure one board to another board.

Solid bricks (i.e. bricks with no holes) are primary used on floors, sidewalks, patios and other types of structures in which vertical strength isn’t all that important.

Their differing uses aside, bricks with holes in them also have the following advantages over solid bricks:

1 – Holey bricks are less costly to make than solid bricks because they require less raw material to manufacture.

2 – The holes in bricks allow the heat from the firing process to more easily penetrate the center of the bricks. That speeds up the curing process which allows the manufacturer to create more bricks in a day.

3 – Holey bricks cost less to transport than solid bricks because they weigh less.

4 – Since holey bricks are lighter than solid bricks, they are easier to lay. Therefore, masons can lay more bricks in a given period of time.

So there’s your answer, Glenn. Thanks for a great question!

To finish up, here’s a fascinating short video that shows how bricks are made. Check it out!