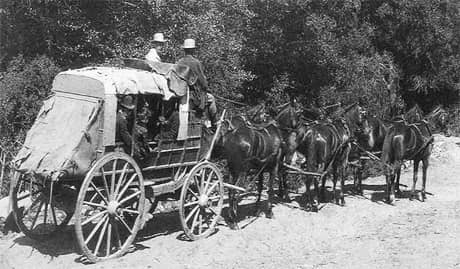 Question from Janet:  I’ve always heard it said that the person riding in the passenger seat of a car is “riding shotgun”.

What’s the story behind that saying?

The answer goes all the way back to the days when stagecoaches would deliver people and packages from one town (and even one state or territory) to another.

Policemen were few and far between back then and robbers took advantage of that fact every time an opportunity arose.

And there was no better opportunity for the robbers than catching up to a stagecoach somewhere out in the boonies where they were miles from the nearest town.

Just as folks do now, stagecoach passengers typically traveled with at least some cash, and the folks who could afford it often traveled with expensive jewelry and other valuables.

What’s more, the stagecoaches also transported gold, silver and bundles of cash from a bank in one city or town to another distant bank.

As you can see, robbers could almost always count on making off with some serious loot if they could successfully pull off the robbery of a passing stagecoach.

In order to prevent their coaches from getting robbed, the companies behind them began hiring an armed guard to ride alongside the driver and constantly be on the lookout out for robbers.

Those guards literally kept a long gun of some sort in their hands to ensure they’d always be prepared to take immediate action if robbers approached the coach.

Most of those long guns happened to be shotguns, and that led to the armed guards eventually being referred to as “riding shotgun”.

Of course the stagecoaches of years past have long since been replaced by more modern forms of transportation, but to this day riding in the passenger seat of a vehicle is referred to as “riding shotgun”!

To finish up, here’s a rather fascinating short video featuring 48 authentic vintage photos depicting life in the wild, wild west. Check it out!