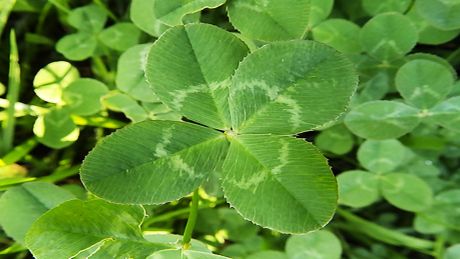 As you probably know, four leaf clovers are considered to be quite rare.

In fact, it’s widely believed that finding one will bring the finder good luck.

But truth be told, four leaf clovers aren’t really rare at all. In fact, there are lots of them out there!

Yes, a lot more clover stems have three leaves than four, but if you search for them you’ll find at least one four leaf clover virtually every time you look.

And you usually won’t have to look for very long before you find one.

Interestingly, four leaf clovers are the same exact species of plant as the three leaf variety.

The only difference is a slight genetic mutation in some stems that cause them to have an extra leaf.

But guess what? Mutated clovers aren’t limited to just four leaves. They can actually have dozens of them.

In fact, the world record for the most leaves ever found on a single clover stem is 56!

Bottom line: If you like to believe that finding a four leaf clover will bring you good luck, I say go for it. There’s absolutely nothing wrong with allowing something like that to add a little optimism to your life.

The next time you spot a patch of clover, take a close look and see if you can find a four leaf clover among the bunch.

Chances are you will, and there’s a good chance you’ll find several!

By the way, the short video below explains a simple trick for quickly spotting a four leaf clover that’s surrounded by a sea of its three leaf neighbors. Check it out!