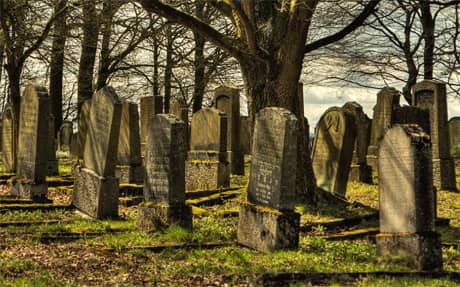 Most folks use the terms cemetery and graveyard interchangeably, but did you know they are actually very different things?

Yes, they are both plots of ground where people are laid to rest after they pass on, but there several very important differences between the two:

Graveyards are typically associated with a local church.

In fact, most of them are actually located on church property, often literally right outside either the front or back door of the church house!

In many graveyards most of the people buried there were either members of that particular church themselves or relatives of one or more people who are/were members.

Cemeteries are stand-alone burial grounds that can typically be used as the final resting place for anyone in the community who is able and willing to purchase a burial plot there.

A cemetery can be located virtually anywhere in the community or the surrounding area – even in a place that’s miles away from the nearest church!

Since graveyards are usually located on church grounds and used by a relatively small percentage of the population, they are usually fairly small in terms of both acreage and the number of available burial plots.

Since Cemeteries serve an entire community (and beyond) they are necessarily larger and they typically have a lot more burial plots available for the public to purchase and use.

Burial plots in graveyards are usually fairly inexpensive, and in many cases they are actually free if the deceased qualifies to be buried there.

If the caretakers of a graveyard do require that folks pay for a plot the amount is usually just enough to help pay for the upkeep of the cemetery (mowing, trash pickup, landscaping, etc.).

This is because most graveyards exist as a service to the church and its members, not as a money-making enterprise.

Burial plots in cemeteries are usually fairly expensive. In fact, many of them sell for thousands of dollars.

Unlike graveyards, most cemeteries are literally commercial enterprises that are in business to earn a profit for the owners/investors.

4 – Religious Affiliation (or lack thereof) of the Deceased

Although it’s by no means a hard and fast rule, the churches associated with many graveyards require that the people buried there be of that particular faith.

The folks in charge of cemeteries typically don’t care about a customer’s religion (or even whether he/she is a person of faith at all).

If you’re able and willing to pay the price of a burial plot, you’re in (well, you eventually will be!).

Since graveyards are usually associated with a church, most of them have strict requirements on how a person’s headstone can be constructed and/or decorated.

Many of the headstones in a graveyard will be religious themed (crosses, praying hands, etc.) and they typically cannot be decorated with any designs or items that are considered to be contrary to that church’s beliefs.

Since cemeteries are primarily money-making enterprises, pretty much anything goes when it comes to selecting a headstone or other type of memorial (although most cemeteries do require them to be acceptable to the general public).

So there you have it. The next time you drive past a graveyard or cemetery you’ll be able to identify it by its proper description!

And finally, speaking of headstones, check out the really weird ones featured in the short video below!